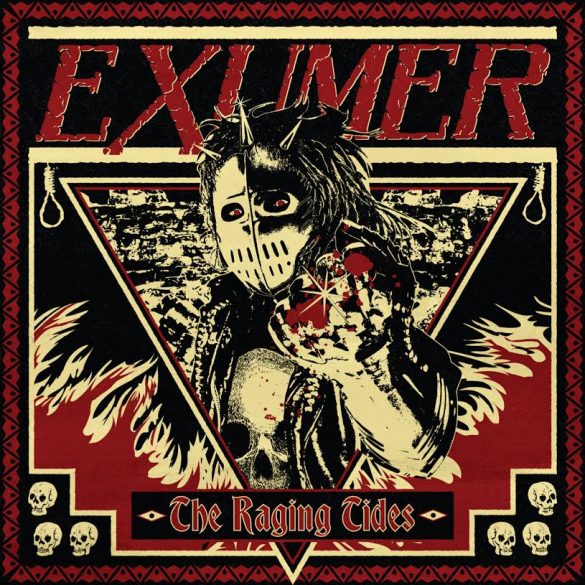 German thrashers Exumer have released « Catatonic » as the first video from their latest album The Raging Tides. The clip was filmed and directed by David Thelen during Exumer’s European tour in January/February and captures the dark lyrical themes of the song, portraying the psychological manifestations of physical torture and abuse.

Vocalist Mem V. Stein explains: « We were compelled to use this track as our first clip from the new album because the song sums up the overall concept behind the record very well. ‘Catatonic’ is also different as it is a mid-tempo cut, but yet just as hard-hitting as any of our fast songs – or even harder in a sense. We were able to create a visually daring piece with the help of our director and his crew, while exploring new techniques for us, working with an actor on the set for the first time. »

Head over to metalblade.com/exumer to watch « Catatonic » and to purchase Exumer‘s new album, The Raging Tides, in various formats.

Read on for some acclaimed reviews of The Raging Tides:

« It’s a non-stop fist-banger with riffs that cut like razors and vocals that punish hard. There’s no posing here. » – Decibel Magazine (USA)

« This album is simply a lot of fun and sets the bar damn high for all the other thrash metal releases of the year! » – Deaf Forever Magazine (Germany)

« This album simply stomps out at least three quarters of the Teutonic Four. It is THE yardstick for thrash metal in 2016! » – Rock Hard Magazine (Germany)

« Hats off: Ten bone-dry and hard-as-fuck slaps to the face! And they all hit the mark…spot on! » – Metal Hammer Magazine (Germany)

« Exumer do deliver – and they do it ten times in optimal shape! » – Legacy Magazine (Germany)

« Exumer know what they are able to and easily rush through a whole bunch of hits! » – Fuze Magazine (Germany)